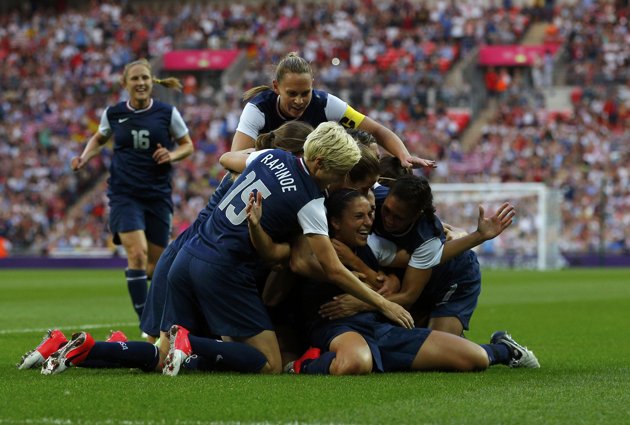 LONDON – The United States gained sweet revenge for one of the most painful women’s soccer defeats on Thursday, beating Japan2-1 to take the Olympic Games gold medal.

A pair of outstanding goals from midfielder Carli Lloyd was enough to ensure the Americans avenged their defeat to the same opponent on penalty kicks in last year’s Women’s World Cup final.

Lloyd missed the Americans’ first penalty in the shootout on that fateful night in Frankfurt, Germany, but was the difference-maker here at Wembley Stadium, scoring with an opportunistic header after seven minutes then smashing home the second just after halftime. Yet even when Lloyd, who also scored the extra-time winner against Brazil in the 2008 Olympic final in Beijing, put the U.S. up 2-0, this clash was far from done.

It was a highly quality contest throughout, the kind you might expect from the two teams who are undoubtedly the finest in the women’s game right now. In the end there was little to choose between them, but the nerve of the U.S., plus some small yet welcome morsels of fortune, got them over the line.

This was an Olympic title (America’s third straight) that head coach Pia Sundhage’s team started speaking about within minutes of letting a World Cup that was theirs for the taking slip through their grasp. It was seen as the only way to make up for that disappointment and redemption was duly completed.

Japan may be left to rue the slow start that left it with an uphill battle. With neither side fully into its rhythm, the Japanese defense was caught surprisingly off-guard. Tobin Heath made a strong run down the left side and fed the ball to Alex Morgan, whose floated cross was directed right toward her forward partner Abby Wambach.

But just as the ball lost a little momentum as it approached the tall striker, Lloyd dashed in and launched a powerful header into the net for a 1-0 lead. It as a wake-up call for Japan and goalkeeper Hope Solo soon found herself under pressure in the American goal.

At 16 minutes, Nahomi Kawasumi sent over a swirling cross from the left and Yuki Ogimi‘s header was pushed onto the crossbar by Solo. The rebound fell to Ogimi, who could only smash it well off target.

Japan was cursing the woodwork again midway through the period, as captain Aya Miyama‘s drive could not be reached by Solo and hit the bar.

If the Americans were a little fortunate to still be ahead going into the break, Lloyd’s second goal was a timely boost to their confidence. Lloyd finished off a sparkling run with a fierce strike past the outstretched arms of Miho Fukumoto and the gold medal was surely wrapped up. Or so it seemed.

Japan did not become world champion by giving up and displayed impressive resilience. With 63 minutes gone, the U.S. could not recover from a mad scramble in its own penalty area and saw its cushion halved. Homare Sawa, the player of the tournament in the World Cup, was starting to stamp her authority on the game but it was Ogimi who got the goal for Japan to send nerves jangling for Sundhage’s side.

And when substitute Mana Iwabuchi went clear on goal with eight minutes to go, it looked like another nail-biting period of extra time could be in the cards. Solo remained strong, though, pushing away a solid effort to retain the lead.

A crowd of 80,203 – a record for Olympic soccer – packed into Wembley, one of the sport’s most iconic venues, on what was a tremendous night for the women’s game regardless of the scoreline.

That would have been of little consolation to the Americans had they lost, but this is a team that has a habit of rising to a challenge of Olympic proportions. The final whistle sparked scenes of delirious celebration as those demons from 13 months ago were well and truly exorcised.