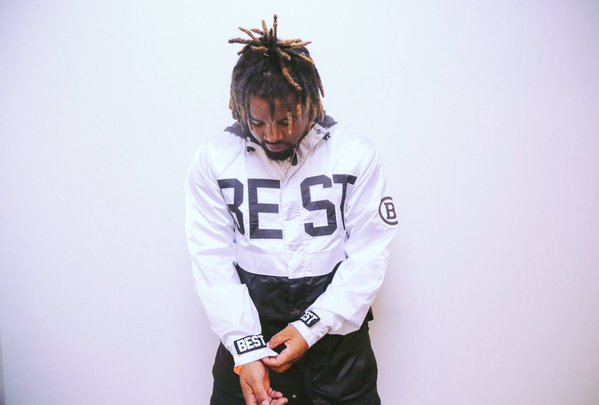 “Instead of bitching about it, I just found ways around it,” says G.U.N, regarding his escape from a less-than-favorable record contract at Deep Ellum Music Group, which had led him to a music semi-hiatus. (He did drop two EPs in 2016 though, “Gun Talk” with Freeband Hunter and “G.U.N Got Wings” with Cardo.) It’s the story of many up-and-coming artists, but in this iteration, G.U.N was able to gain his freedom relatively unscathed (it didn’t hurt that he had a buzz before the deal). During his ordeal, he started making moves on his own, taking a break from music and traveling while his label departure was in the works. “Just make sure your business [is] right,” he said, as he stressed the value of having lawyers and one’s paperwork in order.
In a hip-hop world that’s dropped authenticity as a prereq for an artist, G.U.N still values credibility. His musical collaborations are based on personal relationships, “If I don’t have a personal relationship with you, to where I vibe with you as a person, and then it goes into the music, I’m not going to want to work with you,” he says. “I don’t know you like that, I don’t even know if you really about what you rapping about. I gotta really know that you serious about what you talking bout, I’m not gonna be on the track with no n**** lying.”
And he has built personal relationships with some of the hottest acts in the game. G.U.N met Rae Sremmurd through their DJ, Jay Sremm, through conversations online, and eventually selling him some weed when he was in town. The next day G.U.N ran into him again, as both he and Rae Sremmurd had a performance rehearsal at the same venue. He met the duo, chopped it up with them, sold them some weed too and their relationship was born. G.U.N also developed a bond with OG Maco as well, after meeting him at SXSW, through members of Maco’s OGG camp. Nowadays, they maintain a friendly competition in the studio. These friendships spawned the collaborations we now are becoming privy to.
G.U.N’s a free agent now, but is doing a bit of work with producer Da Dreak and with Satori of W.A.R. Media Group. He’s happy with the independent grind for now and isn’t interested in a record deal at the moment, unless the right situation presents itself; a “partnership deal,” as he puts it. And with the buzz he has, he isn’t tempted to just take a check.
“It’s the official beginning of something new,” he says about his new “Pressure” video. It’s his answer to fans’ requests for more visuals and his aim was to give them an organic, non-scripted product. He plans on keeping the visuals coming, with one for “Mind Ya Business Prt 2” featuring Larry June and OG Maco and another for the “Johnny Cage Remix” featuring Slim Jxmmi of Rae Sremmurd and Key!.
Going forward, G.U.N will be at Sremmfest in Mississippi in December, he’s performing in L.A. in late December and will be at SXSW in March. In 2017, he plans to launch G.U.N TV, a behind the scenes/reality show, emphasis on “reality.” He’ll also appear on Da Dreak’s next project, on a song called “Stand Still.” As for an official album, he wants to grow fan base before he takes on that task, but expect more projects nonetheless.
Keep an eye on G.U.N, as he’s bubbling, and check out his latest video, “Pressure.”