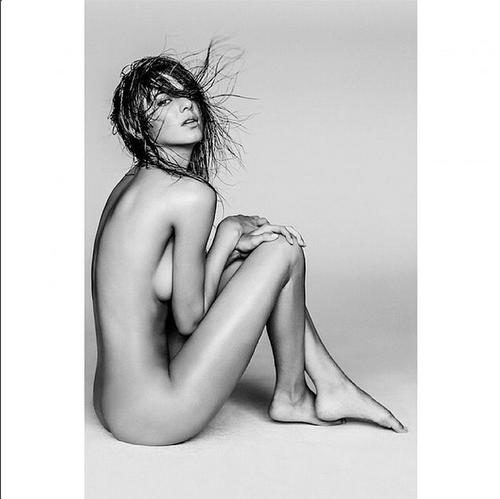 Like sister, like sister? Well, that seems to be the case in the Kardashian/Jenner family.. Shocker. Not even a week after big sister, Kim Kardashian posed nude for GQ, Kendall Jenner has followed behind her, stripping down to her birthday suit for photographer, Russell James. James held a launch party last night (9/10) in NYC, hosted by Victoria’s Secret for his upcoming book “Angels”. The book isn’t set to be released until October 15th, but big sis #2, Kourtney Kardashian gave the world a sneak peek on Instagram of one of the images from the 300-page book, with Jenner posing nude in a classic looking, black-and-white photo.

She captioned the picture with “Saturday muse”. Kendall is giving the “fresh out the shower” look with wet, messy hair, sitting in sexy stance giving just the right amount of side boob. Like anything else they do, the photo has stirred up some controversy – fans have left comments saying that Jenner is too young, that her mom-ager Kris K. should be ashamed for letting her take that photo and well, you get the point, your usual social media negativity.

It’s been reported that Kendall has recently dropped or in the process of trying to drop her last name; she doesn’t want her family/reality TV star fame to get in the way of modeling career. Kendall wanting to break away from her families claim to fame is something she takes seriously and seems to have a promising modeling future ahead of her. Going from posing for prom dress ads to walking in major shows in NYFW, I’m interested to see how far she goes and what big names she’ll work with.