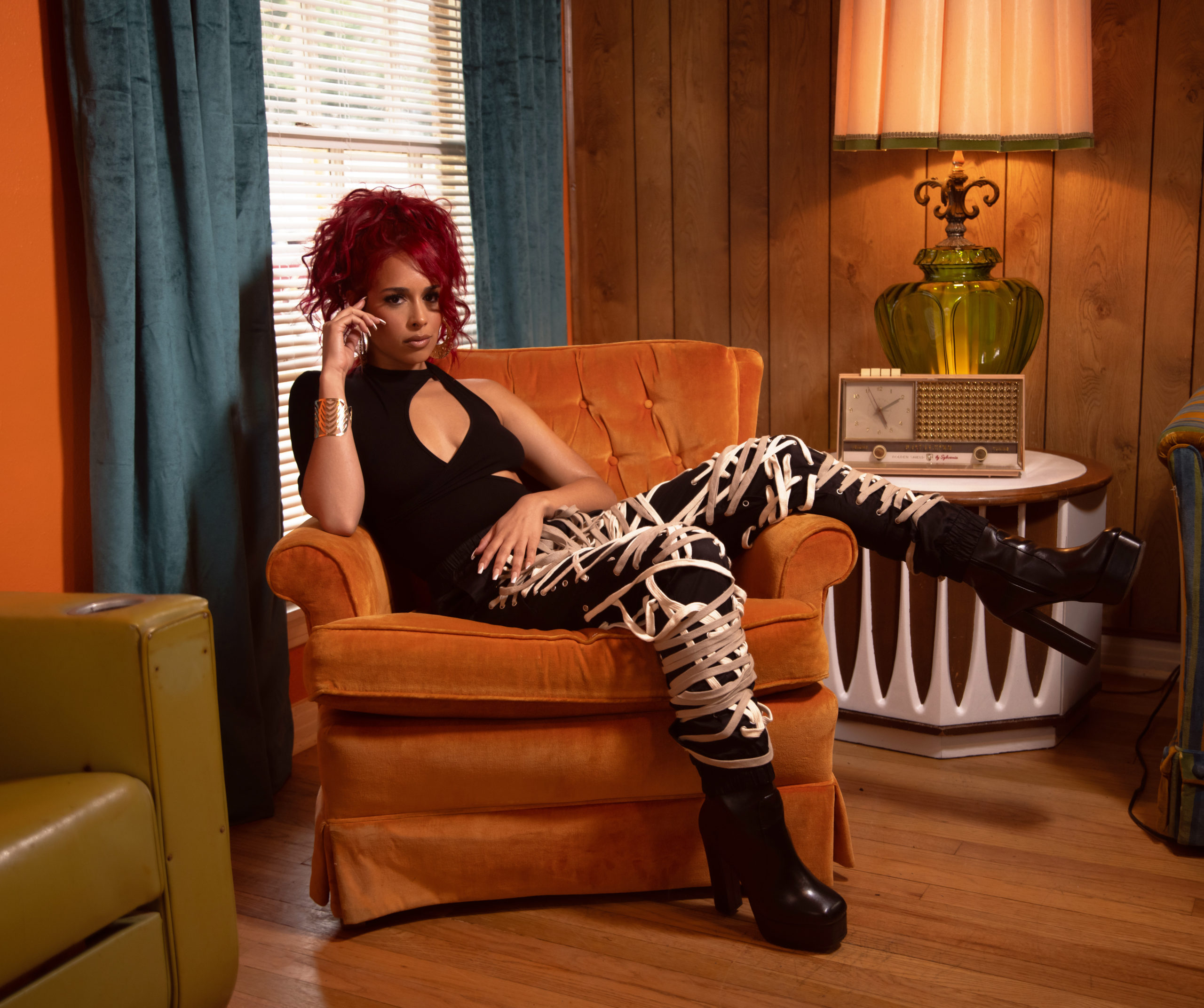 Dominican actress, influencer and singer, Leli Hernandez, grew up in Miami, an amazing child with big dreams. Caught between two cultures, her American surroundings and Latin background, she has learned to excel in both, and her journey continues to evolve.

At the age of three, she saved her mother’s and unborn sibling’s life by calling 911 after her mom, pregnant at the time, passed out. This act combined with her youth and charisma drew her news coverage and she was interviewed by Spanish-language station Univision. “Later on … Univision reached out to my mom and said, ‘Have you considered putting her in anything, theater, anything like in the arts?’” Leli says. “So my mom didn’t really want to put me into it at first, but it was like I almost asked her.” Her love for acting shined through, as she would imitate everyone. Acting classes polished her, and by six years old, she was an actress. She would continue taking acting gigs growing up.

When Leli turned 18, she moved to Los Angeles to seriously pursue her acting career. She was in LA, fresh out of high school, realizing just how expensive the cost of living and college tuition, were, and to help her get acclimated, her mother moved there too. They would, posing as sisters as opposed to mother and daughter, go out and enjoy the nightlife together. One night they lucked up sitting next to actor/comedian Brandon T. Jackson and a television producer. By chance, the producer gravitated toward her, and asking her opinion regarding particular television shows, and the conversation turned into an offer of an internship. Her thirst for knowledge of the industry would be quenched in this experience, as she spent two years working behind the scenes in television. She met the likes of rappers Snoop Dogg, Birdman and Jermaine Dupri, on a show called “Music Moguls.” It was an education in the music industry as well. This would eventually lead to a show with Oakland rapper Too $hort, where she was able to interview a variety of artists. This is where she realized she wanted to be on camera. As a result of her quitting school, her father cut her off financially, so instead of going back home to Miami, she stepped up her hustle and found her way.

She moved to rough neighborhood, living with about seven other people, and was working. She had been encouraged to do short skits to increase her notoriety, but she felt that it would be detrimental to career as a serious actress. When she finally took the advice, and also collaborated with other social media influencers, her social media following exploded. She began doing three skits a day, working with anyone that wanted to work with her, overbooking herself, and running around the LA area to do the collabos. Her industry connects were also beneficial, as was her persistence, and her willingness to work for free. ‘It wasn’t for money that I was doing it, it was because I really wanted to do it … For me it was I appreciate that I’m in this position right now, and that I’m allowed to do this …” she says. “This is my dream; this is what I want to do.”

Skits made her know, particularly the “Caught” series, to the point where she was getting recognized in the airport and the mall. “I was like, ‘Oh my god, that’s so cool, I’m famous.’” It was quite an adjustment, even family she didn’t know yet, knew so much about her before she ever met them.

As her acting advanced, she also eyed a career as a music artist, and timing was key for this transition. “I don’t like forcing anything, I like things to flow, when I do something, I’m very passionate about it. I wanna go all in,” Leli says. “So I think it’s like for anything I that was doing, because I was starting from zero, from scratch. It’s like I have to focus on one thing, and then let things flow. I think that’s what it was for me, I was just literally working, working and then one thing led to the other … With the music, I didn’t know exactly how I wanted to sound, or what I wanted to express, or what language I wanted to do it in, because for me its like I’m in two different worlds, now I have to pick and choose. As a Latin American, for me it was like, I can’t do music in English yet. Because then I’ll be stuck in like, ‘Oh see’s urban, or she’s this or she’s that,’ but I’m Latin. So then it’s like, ‘Oh no she’s trying to be Black …’ So for me it’s like, ‘How do I keep it authentic to myself?’ So I’m going to do Spanish music.”

When she began music, she was unaware that this would be THE time for it. She was going through some emotional situations, she was lonely, had dating difficulties, and change was proving difficult for her. Music was a release, a way to express herself.  She would write poems and monologues, write about her feelings, and because many of her friends are in music, she was persuaded to go to the studio.

And when she tried it, she loved it. She originally had been scared to do music, while acting came naturally to her. Acting allowed her to be someone else, but music required her to be herself. She sees music as more personal and as who she is, “So it’s like if people don’t like my music, you don’t like me,” she explains. She would take acting criticism well, but criticism of her voice, lyrics or music, she’d take it to heart. But she also realizes that not all music is for everyone, and different people connect to different things, so she couldn’t continue to take it personally.  While she’s only one song in (for now), the release of “Piensas,” a song about breakups, from the YouTube series “Bravas,” led her to an uncomfortable space. For the first weeks after its release in October 2020, she felt anxious and confused. She wasn’t sure she was prepared for the response. Coming from comedy and into music, she was used to a different response.  The result was that she found that the music has made her better connect with herself, as it was the first time she had received harsh critiques for any of her work.

This transition was far more difficult, because Leli began from nothing when acting, so very few saw her early days. But now having achieved a level of notoriety, her early days of music are in front of many more eyes. She feels like it has thickened her skin, but she’s passionate about music, and just wants to continue to grow musically.

Going forward, Leli wants to be a performer, dancing and putting on a hell of a show with her music. She wants to be groundbreaking. “When I dream, I dream big … the dreams that I have now, I had in high school, but I never shared it,” she says. “No one’s gonna believe me, because they’re too big. Now I’ll share it, because people can see it. But why? Because I’m already in the path. But that’s the same dreams I had 10 years ago.” She thinks too many people nowadays are looking for the quick rise, but she’s patient, and sees her career growing incrementally and then “All of a sudden, Boom. I won’t even realize like, ‘Oh shit, I made it.’” She appreciates her path thus far, and she wants longevity.

Her rise had been consistent, but the first one to vouch for, to COSIGN her, was her producer friend DeCarlo, who at the time had already worked with Chris Brown, Jeremih and Romeo Miller. He was the first one to push her to get in the studio. But this was things coming full circle, as Leli actually met Romeo her first month in LA. When he learned she had moved to town to be an actress, he invited her out to dinner to get to know more about her. He would then post a picture with her on social media proclaiming that she would be a star one day. At this point in the interview, Leli got emotional. The pic was posted seven years ago, but her progress from that point now had her choked up; she even shed a tear or two, overwhelmed by her journey. She was thrilled when it happened, having watched Romeo when she was a child, and then three years ago he called her to wish her a happy birthday. He told her he had a gift for her, which turned out to be a movie role along side him, no audition needed. When he predicted her success, she was at the very beginning of her career, so it was powerful for her. She sees her path and the people around her were placed there divinely.

Her persistence and drive led Leli to also meet her manager, Jessy Terrero. After learning of him and his work, and that he was also Dominican, she began a mission to meet him. She finally succeeded one day at an event, and later found herself auditioning for projects that he was directing. This included an audition for the Netflix bio-series “Nicky Jam,” in which she flew to Miami, but then found that the role was that of Nicky Jam’s young mom. Only 23 at the time, she felt she had no shot at the mother role. With nothing to lose, she went in and auditioned, relaxed and being herself. A month later, she got a call that she was being considered for the sister role.  Jessy had reached out and asked if he could contact her manager regarding the role, and she confessed that she was without one, that she alone was her entire team. This led to Jessy eventually taking on management duties for her.

“When people don’t make it, they always put excuses, and I realized that in this type of career, anything you do really, it’s just persistence … It doesn’t matter what you go through, it doesn’t matter what life puts you through, you could go to jail, you could anything … you could still get back on your feet. It doesn’t matter how many times you fall, you can still get back up,” Leli says regarding g her takeaways from the Nicky Jam project. This is what made her want to get into music. She was inspired and realized that there wasn’t anything she couldn’t do.

In 2016, she told her mom that she wanted to work with Nicky Jam, and years later she played his sister. And this work ethic will continue pushing her forward. She’s fully focused on music for now, hoping to inspire others, but is open to other acting opportunities. She wants to be known as a motivational force. She believes in persistence, and it is what has gotten her to where she is now, and will get her to where she’s going.

To learn more about Leli’s story watch our full interview below and to purchase Issue 28 featuring Leli click here.