For those of us who don’t find drinking heavily on public streets a fun way to spend a Saturday, the 16th of March in Dallas held more than just a parade. In the shadows of the American Airlines Center, right in the middle of Victory Park, the culture of street skating took over in a big way. Just hours before the Dallas Stars took on the Chicago Blackhawks; skaters like Kechaud Johnson and Ryan Thompson showed the crowd what street skating is all about. The D-Town Throw down is THE amateur street skating competition in the state of Texas, with qualifying rounds held in multiple major cities. With competitors coming from all over the country, the field was littered with the brightest young stars the sport has to offer and some special surprises for the fans. After six highly competitive heats, which included huge air by Taylor Bray, and a best trick win by Dallis Thompson (money, money, money!!) the finals were full of the hunger you expect from amateur events like this. It was great to see the legends like Daewon Song, and pros Torrey Pudwill and Chico Brenes, watching and even giving some of the competitors some tips. It was also special to see the way the crowds reacted as each made their way around to fans, taking pictures and shaking hands. After the dust was settled, and the crowd had their fill, Ryan Thompson won, took home the grand prize for the second time, which included a personalized Dallas Stars jersey (one of the few in the sea of Blackhawks jerseys). Johnson and Corey Hale placed 2nd and 3rd respectively, with a slew of other great performances turned in by the other who placed. The environment in who which the event was held could not have been better. The weather was perfect, a little breezy as time went along; and the Victory Park setting was a picture perfect backdrop. Even though the paying crows of hockey fans were treated to a blowout inside (Stars lost to the 1st place Blackhawks 8-1), the loyal fans of these passionate athletes were given a show worth much more than the free admission.

Peep some more photos below:

By Chris Edwards and Parris Daniel 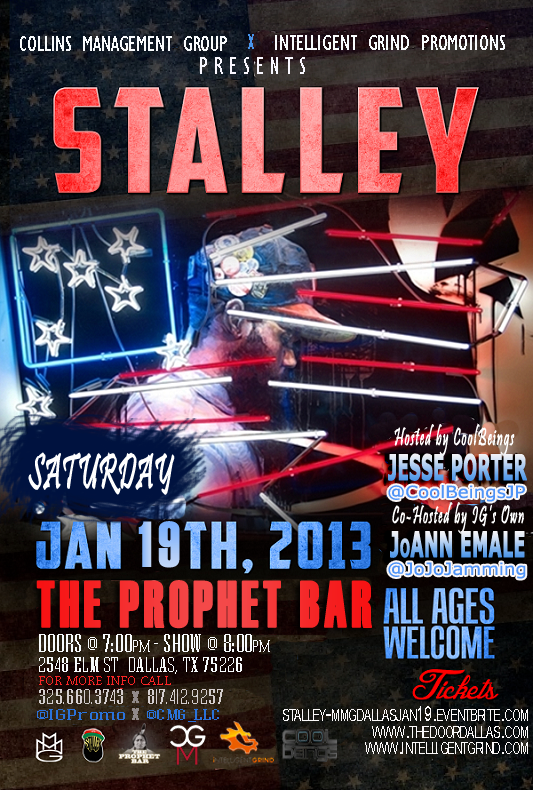 STALLEY LIVE IN DALLAS AT THE PROPHET BAR