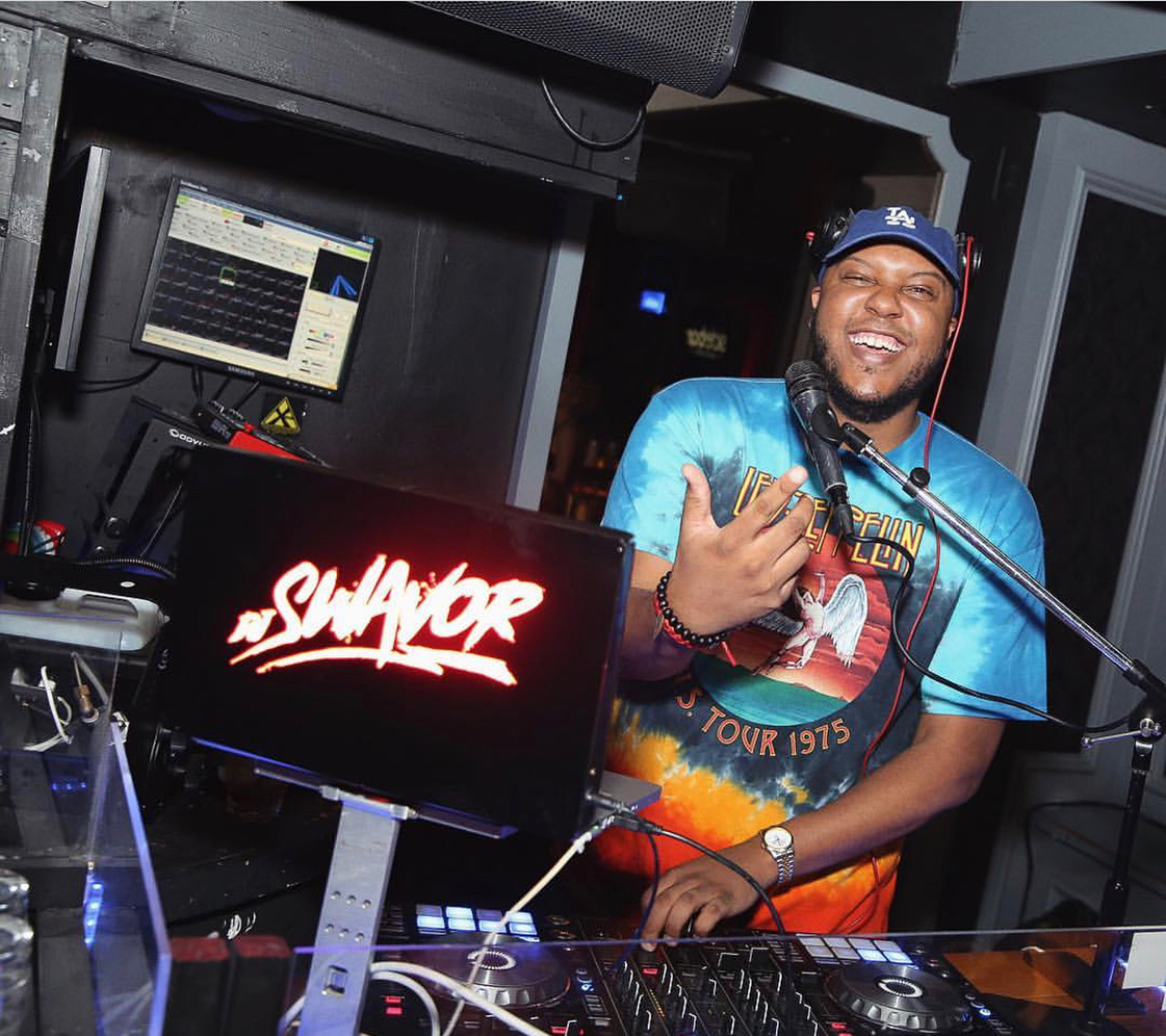 Cameron:  Well first off, let me say welcome to the Cosign Family and thank you for having this sit down with me.  Tell us about yourself. A little about your upbringing and what got you into Djing. 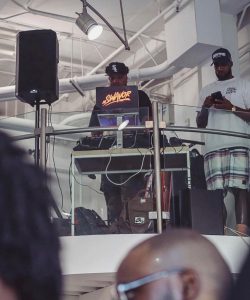 Dj Swavor (our official DJ For Cosign Kicks ) at our latest event For The Love Of Kicks that took place last Saturday at Centre.

Swavor:  My name is Torre Doty aka DJ Swavor.  I am born and raised in Austin, Texas… well actually it’s a town outside of Austin called Pflugerville… so we’re gonna just say I’m from Austin.  I don’t wanna sound like a country bumpkin (laughs).  I grew up in the church and around music.  My parents played music all the time… mostly gospel.  I always had an ear for music.  As I got older and started getting my own money in high school, I started buying every CD you could think of. I had to hide it because I couldn’t bring secular music into the crib.  That kind of made my music for passion even greater.  I was in high school when Napster and Limewire were poppin off (I guess I’m kinda telling my age *laughs).

Cameron: I remember Limewire.  My computer had all the viruses *laughs*

Swavor: You weren’t real unless you ruined at least one computer with Limewire.  But I was known as that dude with all the music.  I started making Mix CDs at $5 a pop and people liked them.  Later in 2008 when I graduated from college and moved to Dallas for my other job, I started going out and mentally critiquing other DJs.  I thought to myself” Ma I can do this too.”  Not to say the other DJs back them were trash, but they encouraged me to step out and try it on my own. So one drunk night, I had just got my tax return and a nice bonus from work… I bought my equipment.  It didn’t really hit me until it came to my front door.

Cameron: No going back now huh? In it to win it.

Swavor: Right! That was like back in 2011 too.  I didn’t really take it seriously until 2014.  That’s when I really started getting into clubs.  It took longer than I thought but I knew that I could make a name for myself.

Cameron:  So what’s the story behind your name?

Swavor:  One of my favorite artists was Big Kuntry King and he had a song called “Swavor” and back then, the word “Swag” was just at the peak of popularity.  So it fit me and it just stuck. 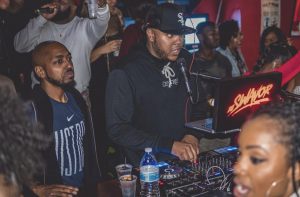 DJ Swavor in the middle of a making one of his famous transitions at Trappiest Hour. Where he can be seen every other Thursday at OT Tavern.

Cameron: That’s dope!  So this is one of my favorite questions to ask.  What would you say sets you apart from other DJs out in the game?

Swavor:  In the Club, you have a lot of DJs just dropping songs with no transitions.  It’s literally song, horn, and drop.  I hate that! I feel what sets me apart are dope transitions.  Every song you play has to flow together.  Whether it be a word or a sound… it has to flow.  One of my greatest weaknesses use to be talking on the mic.  So transitions were how I made my mark.  Also what sets me apart… Shoes.  There might be other DJs that rock shoes but I promise you they not on my level.

Cameron:  Okay. Talk yo stuff then!  What would you say are your biggest annoyances as a DJ?

Swavor:  Definitely people coming up to you asking for music.  It’s always somebody that asks for something that does not go with the vibe… at all!  Another one (well, that was 1a, this is 1b), opening DJs who do not know the role.  I was taught, when I first started Djing, by DJ Klassic (major shoutout) when he gave me the first opportunity I had in the club.  He gave me 2 hours.  The whole week I pictured the whole club being packed and me murdering it.  I thought I was gonna rock it so hard that he would say “Damn, no way I can go after him”.  So, I get to the club at 10 and nobody’s there (of course right?).  So I’m still playing hood/turn up music, and he let me do it and didn’t stop me.  When I was done, I remember he told me “You need to up your music game”.  I had to realize that I’m not the show AND had to learn how to rock the crowd without playing the top 40 hits.

Cameron:  Would you say the DJ world is a terroristic one?

Swavor: I’ve definitely felt the terroristic attitude. Undercutting is a real thing too.  I’ve told promoters my price and they’ve responded with “well so-and-so will do that for this much.”  It’s got to a point economically and competitively that DJs almost can’t demand a lot of money.

Cameron: What has been your proudest moment as a DJ and what are your favorite gigs?

Swavor: My most proud moment was DJing a sneaker event at the Bomp factory. Sneakers have always been a passion.  Sneaker events are my favorite gigs.  Just being apart of that culture and having thousands of people watch me Dj.  I don’t like the club scene because it gets… well I don’t wanna say repetitive.. but it gets predictable.  You may not play the songs in the same order but you WILL play the same songs. I love house parties and wish people did more of those.

Cameron: So I remember you saying that you are from Austin, Texas. I remember they have a saying that states “Keep Austin Weird”.  Do you think that is the case? Or do you find that the culture of Austin is shifting?

Swavor: I think it’s shifting because Austin now has a lot of transplants. I honestly think that’s why South by Southwest is flourishing.   It still gives you the “weird” Austin vibe.  Austin’s sound use to be a Baby Houston but now you are hearing all types from music from different regions.

Cameron: It has been said previously that Dallas does not have a solid culture.  Do you agree with this? And if not how would you say it compares to the culture of Austin?

Swavor: The culture is completely the opposite of Austin. Dallas has a culture. By nature, Dallas tends to gravitate more towards the streets than compared to Austin. That also is shifting because many corporations are moving to Dallas, which brings in more transplants. Dallas has become more open to more sounds.   You want to be able to touch a greater number of people. More transplants coming to Dallas can only help the culture.

Cameron:  What would you say are the biggest misconceptions of DJs?

Swavor:  Honestly bro… nothing in the Top Forty.  I don’t even listen to it in my car because I hear it so much.  Right now Dallas artist wise, I’m listening to Rikki Blu and Tre Ward.  In general, I’m more of a 90’s R&B type Dude.  I’m a lover, not a fighter. I know that’s making me sound old but I don’t care.

Cameron:  And finally where can the good people follow you and find out.

Swavor:  First off, you can pull up on me every other Thursday at OT Tavern for Trappiest Hour.  Every other Saturday (the first and third Saturday) at Side Bar.  If you’re a sneakerhead check out my youtube channel where my goal is to bring together Sneaker Culture and Music.  IG is @Djswavor