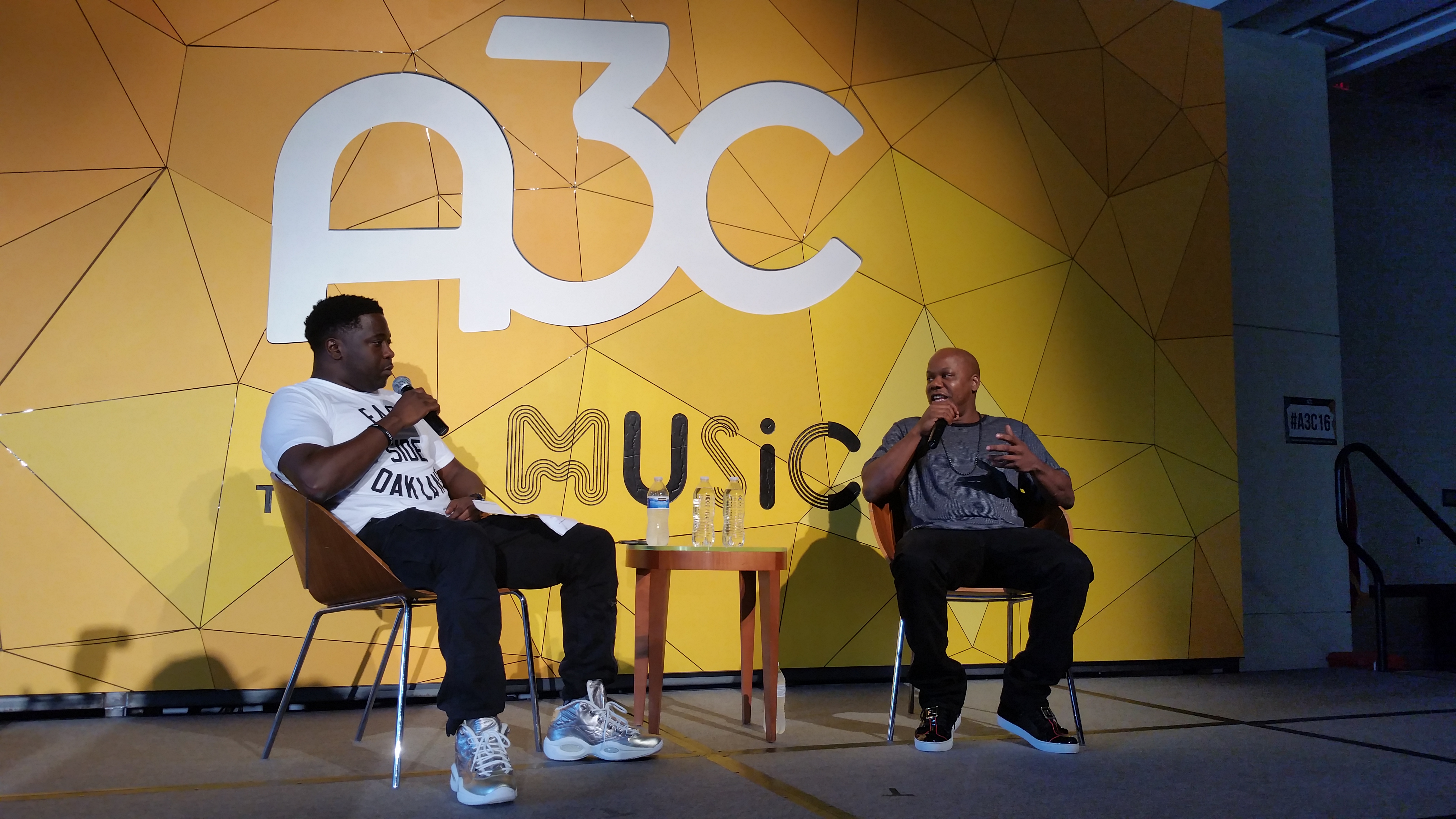 Friday was day three of A3C, and featured perhaps my most anticipated event of the entire festival, the “A3Conversation w/ Too $hort – The Bay Area: Now and Then.” Like many of the attendees, I grew up listening to Too $hort, far before I probably should have been. I believe my first Too $hort tape, thanks to either BMG or Columbia House mail order music clubs, was 1993’s “Get In Where You Fit In,” which I was aware of thanks to The Box. It remains one of my favorite albums from that era.

Journalist Branden Peters facilitated the conversation with the Oakland legend, and was an obvious choice because of his own roots in the Bay Area. They reminisced about the ‘80s and the turmoil their hometown went through.   Too $hort, originally from Los Angeles, described Oakland as the scene of a drug war, where car bombs were going off and bodies were being chopped up and left in the hills. When he moved there, the Black Panther Party was still active, it was the city in which “The Mack” was filmed and the professional sports teams were winning championships, essentially happenings of every stripe, all going on in the Bay.

$hort was part of the graduating class of ’84. When he was in school, people freebased, and this was a prestigious thing. But not long after, crack became more economical, and he noticed his classmates were either becoming crackheads, or becoming rich from selling crack to those same crackheads. He says he took all of it in, applied the musical influences he was hearing in New York hip-hop, particularly that of Grandmaster Flash and the Furious Five’s “The Message,” and rapped about what he saw in his new hometown.

$hort signed (actually shook hands for) his first record deal with 75 Girls, a local record label in the Bay. It belonged to a man named Dean Hodges. He and $hort would spent a lot of time together throughout the entire record creating process. From recording, to getting the music pressed up, to reaching out to retailers, Hodges taught $hort the ins and outs of the music business. Eventually 75 Girls failed, and equipped with the knowledge from Hodges, $hort followed the same process they had been using. $hort pressed up “Freaky Tales,” and against everything he was told, he cursed on the record, and had cranked the bass way up on the final mix. They told him it would make the needle jump off of the record, but $hort was pressing up tapes, so he didn’t care, he just knew that putting this one out would be the end of his financial struggles. After selling 75,000 tapes, Jive Records came calling with the national distribution deal he had been eyeing.

Too $hort’s first went on tour with N.W.A., and described the shock of people across the country knowing the lyrics to his songs as, “it was like losing your virginity over and over.” And after his performances, he would get off stage and go meet and hang out with the people in the crowd while N.W.A. performed.

Peters and $hort talked about nearly every aspect of $hort’s early days, including the creation of the word “Bitch,” as he and his rap partner Freddy B would say it. It came from skits they used to do on their early records about pimps and hoes and hoes smoking dope. He and Freddy B would DJ the wildest parties, with the understanding that at midnight, they’d stop the music and the crowd had to watch them perform. “Bitch” began to pick up steam.

Too $hort’s situation opened Oakland to Jive Records, as other artists watched him win and wanted to get on, the label went looking through the Bay for the next Too $hort. Other rappers just wanted to emulate $hort and his success. Before he and Pimp C got close, Pimp told $hort that seeing him on his album cover with his Cadillac inspired him to be a rapper and to want to be on Jive. As for his contemporaries, it was always a competition, particularly with E-40. They wouldn’t spy on each other’s camp; they would talk to each other regularly, but were always trying to out do one another.

In 1993, $hort moved to Atlanta. He had been house shopping in the Oakland hills until a fiend showed him how much more house he could get for the same amount of money in Atlanta. So that year during the “Jack The Rapper” hip-hop convention, $hort quietly left, purchased a house and return to the event as nothing had happened. He was trying to escape the explosion of homicides in the Bay and move to the fun times of Atlanta, (i.e. Freaknik, strip clubs, etc.).

In Atlanta he met Lil Jon, who was DJing and working for Jermaine Dupri at So So Def. $hort wanted to drop some verses for Jon’s “Who You Wit” record, but Jon wasn’t interested. Instead, they collaborated on “Couldn’t Be A Better Player” instead, and it would be $hort’s first dance/club record. In the meantime, Jon had signed to a local guy named Carlos, and that relationship had deteriorated. Jon wanted to put out music, but couldn’t because he was beefing with Carlos. $hort intervened, gave Carlos what the money that he wanted, and Jon was free, with the understanding that all $hort wanted was records. Jon would produce quite a few Too $hort songs over the years, and eventually “Blow The Whistle” in 2006, what $hort refers to as his signature song. $hort was 40 years old when it dropped.

Naturally, $hort went on to talk longevity this afternoon and he attributed it to work ethic. “That ain’t smoking blunts and getting your dick sucked all day, it’s work,” he preached. And now in 2016, he has a new album on the way. It’s an independent project and this time is heavy on features, because he wanted it to be. He does his “Too $hort’s BoomBox Podcast,” and has been debuting his new records there. When asked if this was his last album, he says, “It’s always my last album, always.” http://cosignmag.com/a3c-hip-hop-fest…16-day-2-a3c2016/

$hort took questions from the audience to wrap up the event, but preempted any awkwardness by requesting, “Just don’t ask me if I know your momma.” Classic Too $hort. Awesome event, A3C.