“I’m the only me there is and I am my business. I don’t know anyone else who’s published books, can rock shows, design clothes, direct/shoot videos, and drop music that’s actually somewhat decent. Also, my subject matter is a little more ‘real’ than a lot of artists I see. People always thank me and tell me they relate so much to the things I write and I’m just like, ‘Wow, I didn’t realize just how much importance there is in what I do.’ I’ve literally had people tell me I’ve saved/changed their lives. Not trying to gas myself, but I think that’s pretty unique. I think there’s special place in the ‘industry’ for artists like me.” – David Morgan

David Morgan is a native of Houston, Texas who moved to Dallas with his mom and two brothers when he was nine years old. Without a real sense of reality, he dreamed of being a Power Ranger, ninja or a cowboy. He was fascinated by cartoons, Nickelodeon sitcoms and Nintendo games (Legend of Zelda is his fave). In 1st grade he created his own comic series and hasn’t stopped drawing since.

His career began when he took a leap of faith and left college to escape from the stress of things (work) he didn’t care about. Though having a degree comes with more job opportunities, he says, “I’m not trying to work for anyone other than God and myself.” David is a multi-talented artist, musician and author who has faith in himself and follows his gut. He’s written three books: “Light,” “Love,” and “Life,” which are collections of his writing and photography. He’s also released multiple EP’s and albums that can be found on SoundCloud, iTunes and Spotify.

David finds inspiration from similar artists in his industry, like Kendrick Lamar and Pharrell, but he mostly relates to Tyler, The Creator. “I feel like I’m him,” he says. “He does everything; clothes, music, cartoons, TV shows. Everything I want to do. And he doesn’t care what anyone thinks, he just does what he likes. That’s how I try to be, too. Plus, he’s Nigerian, so he’s probably my brother in some alternate universe.”

David says that his biggest accomplishment to date is being able to wake up today. In the next five years he looks to be somewhere, making cooler stuff than he’s making now, and following his road to success: being able to sustain and make an honest living doing whatever makes him happy. “The life of an artist is nothing but a bunch of different leaps of faith,” he says, and he’s on the path toward taking his next. His recipe is different from what we’re being fed daily and he’s bringing it to the table for us to taste.

We #COSIGN David because we know his work will inspire people for generations to come. 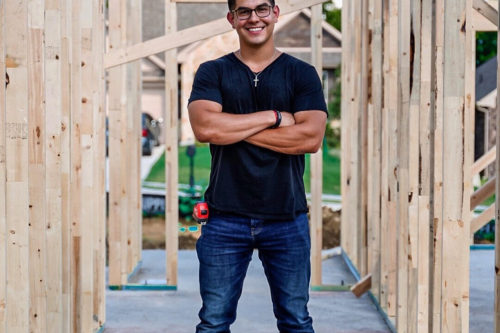